Voice of Gowanus to File Suit Against Gowanus Rezoning 1.15.21

GOWANUS, BROOKLYN - Attorneys for community coalition Voice of Gowanus (VOG) will file suit against New York City’s Department of City Planning today.  The legal suit, to be filed in State Supreme Court in Kings County, challenges the de Blasio Administration’s illegal plan to use a so-called “virtual” land use review procedure for the proposed Gowanus rezoning.

The suit challenges multiple aspects of the largest proposed city-led rezoning in recent times—at 80 square blocks, more than twice the size of Hudson Yards—and seeks to stop the de Blasio Administration's attempt to ram it through in the midst of a global pandemic and economic crisis, when the public is unable to participate fully.

“When you’re dealing with a massive project of this scale that is going to impact so many people’s lives, the community must have its voice heard; that is simply not possible with virtual public hearings,” said VOG’s attorney Jason Zakai of Hiller, P.C. “There are detailed, step-by-step rules laid out in City law on how to conduct the public review process. They are there for a reason, and the City must follow them, even if that means waiting until the pandemic is over.”

The suit calls for the start of the Uniform Land-Use Review Process (ULURP) to be temporarily delayed until the pandemic has been brought under control, and aims to stop the Department of City Planning from certifying the proposal on January 19th, 2021.

“Virtual ULURP is illegal pure and simple,” said Penn Rhodeen, an attorney and member of the VOG legal committee. “ULURP was already tilted against the community prior to the pandemic. Now the city tries to create a false sense of urgency for this rezoning in a shameful attempt to justify an even more watered-down approach to the public review that is guaranteed by the city’s charter. Our suit is on the right side of the facts and the right side of the law. Suits like that win.”

VOG also continues to consult with environmental expert Maureen Koetz regarding significant health and safety issues related to the toxic pollution and raw sewage overflows in the Gowanus Canal, an EPA Superfund site that lies at the center of the proposed rezoning area. The Gowanus Legal Defense Fund continues to generate support for suits that challenge this deeply flawed rezoning proposal.

“We have been watching with horror for years as the ill-advised Gowanus rezoning crept forward. We tried to improve the plan through our civic engagement, but the city thinks it knows best and has left us with no choice but to file an action to stop this de Blasio madness,” said local resident Debbie Stoller of VOG. “Gowanus deserves better - that’s what we’re fighting for.” 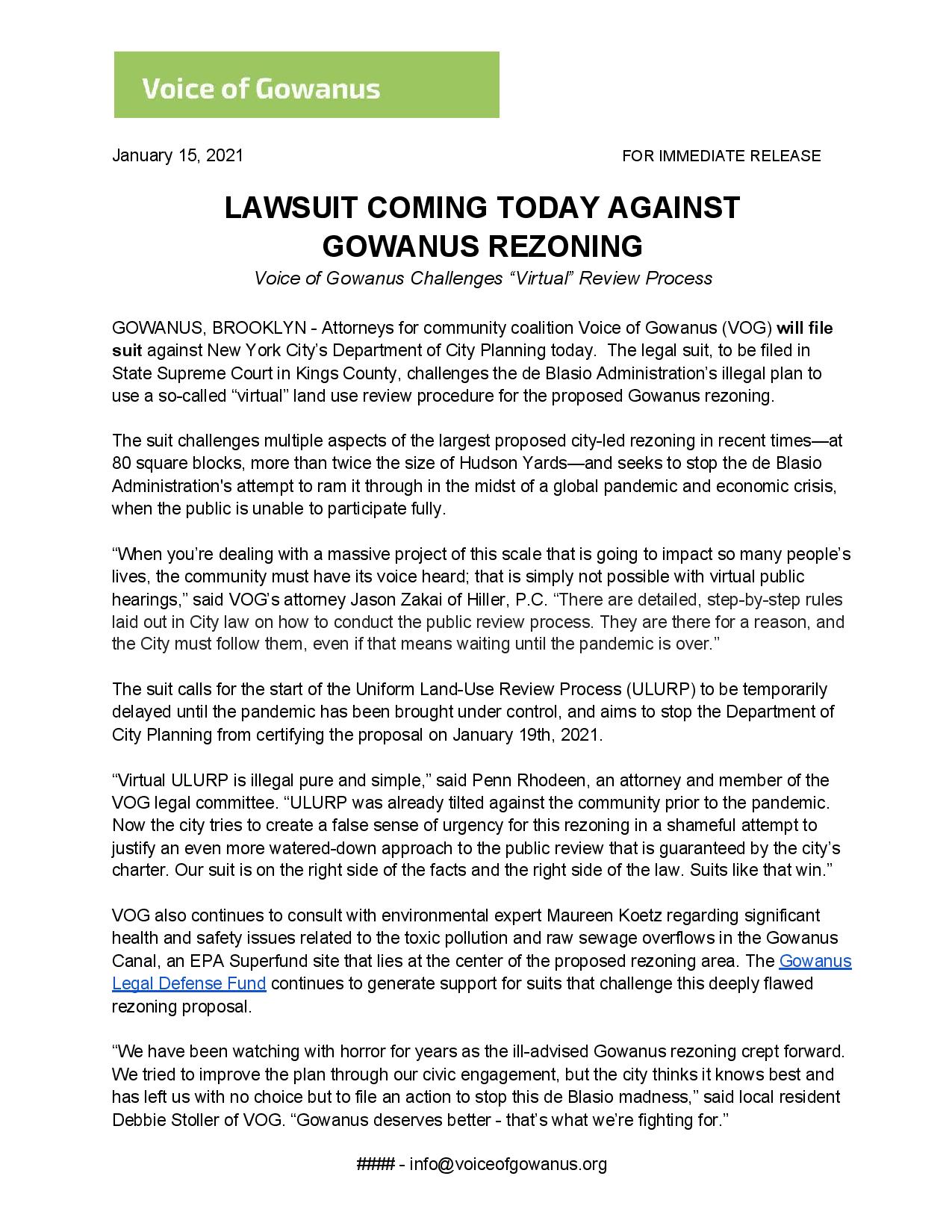