Please become a signatory to a new: Coalition Letter which Requests That Governor Hochul Comprehensively Remediate All Toxic Sites in the Gowanus Canal Community to "Pre-Disposal Conditions."

Voice of Gowanus is launching a new campaign to safeguard public health and the environment throughout the Gowanus Canal community.

Please join our effort today by becoming a signatory to a self-explanatory coalition letter which requests that Governor Hochul remediate dozens of highly toxic sites to "pre-disposal conditions" in order to safeguard public health and the environment around the Gowanus Canal:

The Gowanus Canal is arguably the most toxic contaminated waterway in America.  The U. S. Environmental Protection Agency (EPA) is in the process of removing nearly 600,000 cubic yards of cancer-causing "black mayonnaise" coal tar from the canal at a cost of $1.5 billion.

Regarding its cleanup, EPA has declared that:

"The remedy relies on the control of upland sources of contamination to the Canal, including the remediation of three former MGP [Manufactured Gas Plants, not in the original] sites adjacent to the Canal−−Carroll Gardens/Public Place (formerly known as "Citizens Gas Works"); former Metropolitan MGP, and former Fulton Municipal Works MGP (Fulton MGP) (emphasis added)."

Citizens will be stunned by the array of toxic sites that New York State has failed to cleanup around the Gowanus Canal, including the three Manufactured Gas Plants referenced by EPA. 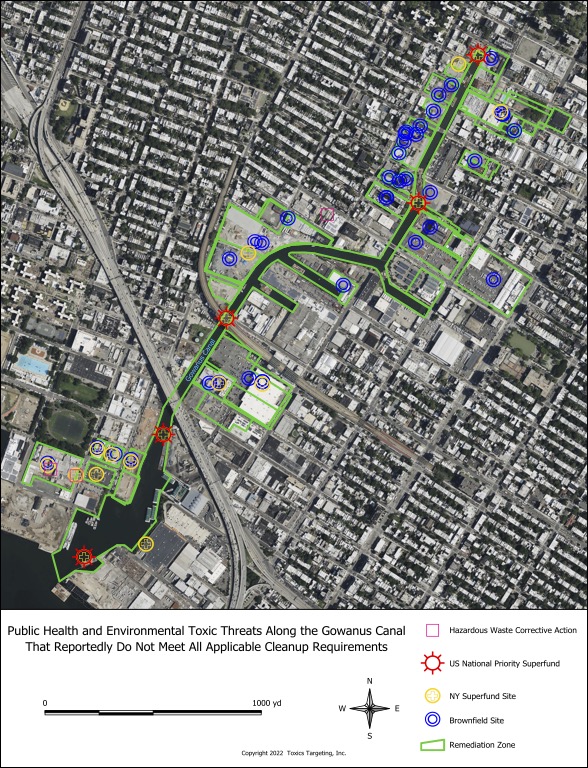 See: Public Health and Environmental Toxic Threats Along the Gowanus Canal That Reportedly Do Not Meet All Applicable Cleanup Standards

Governor Hochul has no plans to remove staggering amounts of cancer-causing and otherwise toxic contamination up to 150-feet deep at dozens of sites that are documented to threaten public health in the Gowanus Canal community.  Our goal is to require the Governor to enforce a critical provision of state law to remediate toxic sites on a comprehensive basis in order to restore them to "pre-disposal conditions."

That is the purpose of our new: Coalition Letter Which Requests That Governor Hochul Comprehensively Remediate All Toxic Sites in the Gowanus Canal Community to "Pre-Disposal Conditions."

Unless concerned citizens require the Governor to fulfill our request, many toxic sites will continue to release toxic fumes that can intrude into homes, schools and buildings.  Increased flooding caused by climate change could spread highly toxic underground pollution throughout the Gowanus Canal community as Light-Non-Aqueous Liquids float out of the ground during high-water events.  Finally, the areas cleaned up by EPA will become recontaminated in years to come in an epic exercise in futility.

Citizen activists needed.  Take action today before it is too late.

To learn more about becoming an activist please  join the group.